In May 2019 The New York based publishing company Apollo launched ‘Tommy at 50’ a book celebrating the making of The Who’s unique rock opera first released in May 1969. I wrote two chapters on the Mood and Look as background to the making of Tommy from the perspective of developing friendships, the counterculture, social/political change and contemporary art scene. Chris Charlesworth wrote two chapters on the Music and Legacy of the album. He brings a perspective shaped by a career as a music journalist and author of many books on rock culture. He brings unique knowledge and insight to the book having written extensively about The Who over the years. Here are five spreads from the Mood and Look chapters of the book.

Writing about Tommy is a personal story of developing friendships and growing interests in spiritual ideas. It is about the search for meaning and purpose in relationships as well as the search for expression in visual form reflecting cultural ideas active in the sixties. Pete and Karen Townshend were at the centre of a growing counterculture in central London at the time and later, in Twickenham, at the heart of a growing Meher Baba community. Our paths crossed during my time as art editor of the alternative newspaper International Times and at venues such as the UFO club, a multicultural space that grew out of the growing psychedelic scene. The counterculture was expanding rapidly in 1967. The pace at which things happened was dizzying. At one moment I would find myself in a police raid at the IT offices, the next moment creating a poster for the 14 Hour Technicolour Dream benefit concert raising funds for IT legal defence. At other moments I’m in a taxi with John Hoppy Hopkins going to meet Andy Warhol and half the Beatles at a London hotel or at the end of a telephone as part of a chain-call arranging a demonstration against the News of the World anti-drug campaign. I would be on scaffolding, along with Dudley Edwards, over a cold autumn with frozen fingers painting a hippy tea house shop front called the ‘Flying Dragon’ in Kings Road, Chelsea or I would be driving the psychedelic Buick painted by Binder Edwards Vaughan seeking a Helter Skelter to place in the giant hall of the Alexandra Palace for the 14 Hour Technicolour Dream event.

A subsequent move to an apartment next to Richmond Bridge led to an expanding Meher Baba community in Twickenham. Pete and Karen moved into a house opposite Eel Pie Island and Ronnie Lane of The Faces and his wife Sue moved into a flat near Richmond Bridge. Days were spent working in the studio, meeting up with fellow seekers and neighbours popping in and out of each others homes, walking the dogs along riverside paths and visiting sound studios to hear current recordings. Meher Baba activities included fund raising events, meetings and silence days and endless conversation in each others kitchens. The commission to create artwork for the Tommy album grew naturally out of this close Twickenham scene.

The principal message of the Tommy artwork is one of illusion and tricks played on the mind as it tries to make sense of the world. The notion that our grasp on reality is mediated by a set of primary senses sight, touch, smell, sound and taste defined the times. The sixties were a decade of sense based knowledge, a physical decade as art and performance merged. Investigations into the psychology of seeing and mechanics of perception led to ideas of expanded consciousness enhanced by perception altering effects of psychotropic drugs. Perceptual ideas were explored in Optical Art as expressed in the paintings of Bridget Riley and kinetic sculptures of Jesús Rafael Soto. The growing audience for staged magic tricks, hypnotic trance acts and surreal TV shows mirrored the times. 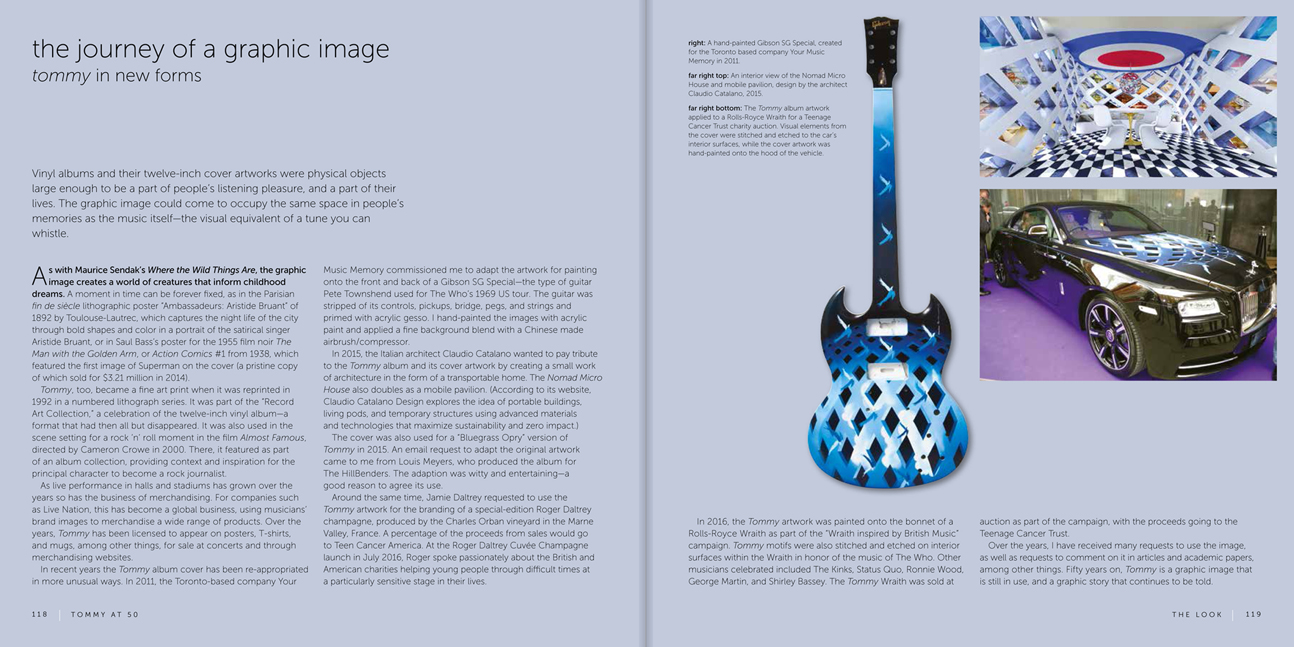 Over the years the Tommy cover has been applied in any number of ways. I have hand painted cover artwork onto a Gibson SG Special, the guitar of choice used by Pete Townshend on the first stadium tour of the opera in the USA. I also applied the cover image onto the bonnet of a Rolls Royce Wraith with the help of the companies specialists following a request from Roger Daltrey as part of a celebration of English rock music with proceeds from a Rolls Royce auction going to the Teenage Cancer Trust.

The Tommy commission highlighted something about a counterculture and rock music scene in the sixties before things became part of a global business. I was living alongside young people making things happen as distinct messages were published, unique clubs and galleries opened and rock bands evolved. After Tommy I began working in a wider media landscape rapidly expanding in all forms of communication. Part of this was a print culture keen on commissioning new and exciting design and illustration talent both at home and abroad. My next stop was New York.