I have an interview with Guy Sangster Adams in the current issue of Plectrum magazine (issue 9 June/July 2011) in which we discuss early work, recent commissions and current work on tree portraits. The interview is accompanied by a centrefold image drawn from the folktale series alongside the following poem.

Just the right size to play with.

As we get bigger.

In an old desire

To trifle with everything. 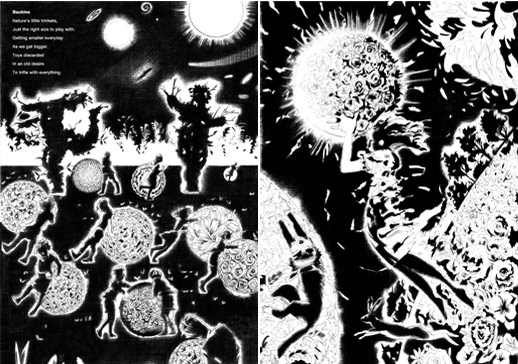 Plectrum is a narrow looking (half A4 folded lengthwise) magazine though there is nothing narrow in its ambition, proudly announced on the cover, to explore the faultlines of music, fashion, books, film, art and performance and nothing narrow in the efforts of Guy Sangster Adams who is publisher, writer, designer, production and distribution manager all rolled into one. Heroic print in a digital age. http://www.theculturalpick.com/